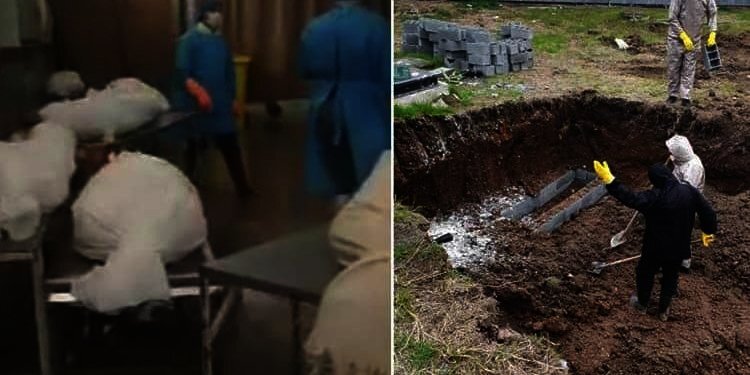 Despite the more than 23,900 COVID-19 deaths in Iran, the Iranian regime has allowed some businesses to resume work as of tomorrow.

The 23,900 death-toll was announced today by the National Council of Resistance, an opposition group that announces the number of COVID-19 deaths every day.

The organization said that the deaths occurred in 261 cities and announced the death toll for each province.

Iran’s Ministry of Health said today that only 4,232 people had died from the virus in the worst-hit country in the Middle East. The Ministry does not provide separate death tolls for each province.

The regime’s president Hassan Rouhani said five days ago that “low-risk” economic activities would resume in all provinces except the capital from April 11.

Businesses will resume work in the capital on April 18.

Today, the spokesperson of the Ministry of Health said that the number of COVID-19 infections in six Iranian provinces has “relatively increased” since people started leaving their homes.

According to the Babol Medical Sciences University, since the regime announced the first virus cases in the city on February 19, 15,000 patients suspected of being COVID-19 positive have gone to hospitals with severe breathing difficulties.

In Tehran, Alireza Zali, the Head of the capital’s COVID-19 Headquarters said that a poll showed that 75% of transportations in the province were for “providing daily needs”.

He also told the state-run ISNA News Agency that at least 76% of Tehran citizens wanted stricter COVID-19 regulations if it guaranteed their health.

Alireza Zali said that one third of Tehran citizens did not take washing their hands for 20 seconds seriously.

This is not the first time regime officials have blamed citizens for the high rate of infections in the country.

But Iranians on social media platforms blame the government for covering up the real scope of the outbreak which has led to an increase in the number of infections and COVID-19 deaths.

They also say that the regime has not provided any substantial aid while telling them to stay home.

The government has promised up to $36 a month for the 3 million of the most impoverished Iranians and only a loan for 4 million low-income families.