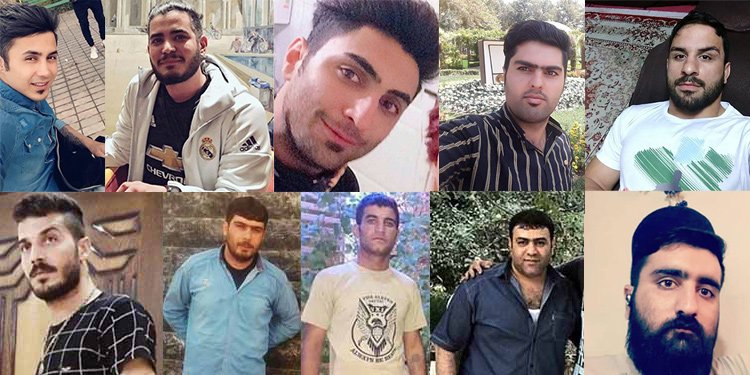 A protester in Isfahan has already been hanged by the regime. Mostafa Salehi was executed on August 5 for his role in Iran’s December 2017/January 2018 protests in Isfahan. The father of two said he was tortured to confess to a murder he did not commit. He maintained his innocence until his death.

Navid Afkari Sangari, 27, was sentenced to six years and six months of prison, and 74 lashes for the murder of a security agent and his participation in 2018 protests in Shiraz. Two of his brothers were sentenced to overall 81 years of prison and lashes over protests in 2018.

Navid’s death sentence has been confirmed by the Supreme Court and his request for appeal was rejected. Navid Afkari is single and worked as a plasterer before his arrest. He is also a wrestler and has won several national championship medals.

Navid has sent several audio messages from prison to deny the murder charge brought against him. He says he was forced to confess to the murder under torture.

“They pulled a plastic bag over my head and kept it there until I nearly suffocated. They brutally beat my hands, stomach, and feet with batons while using vulgar profanities and insults. They also tied me and poured alcohol into my nose,” he wrote in a letter from prison.

According to his lawyer, eyewitness accounts of the torture that were included in the protester’s dossier were ignored by the court’s judges and his confessions under torture were used as evidence for murder.

Many politicians, including US President Trump, and famous athletes have called on the regime to halt the death sentence.

Amir Hossein Moradi, Saeed Tamjidi and Mohammad Rajabi were all sentenced to death for their participation in November 2019 protests in Tehran and for being “riot leaders” according to the regime’s Judiciary.

Amir Hossein was brutally beaten by security forces during interrogations after his arrest. According to a source close to his family, he said that he was subjected to electric shocks and told that if he did not cooperate, his stay in solitary would be prolonged. He also said that an agent stood on his chest, damaging his rib cage.

Mohammad Rajabi and Saeed Tamjidi have said they were kicked, hung upside down and repeatedly beaten.

Amir Hossein’s “confessions” were used as evidence by the court to convict all three. He told the judge during his trial that he was forced to confess under torture and retracted his confessions.

Saeed and Mohammad fled to Turkey after Amir Hossein’s arrest but were deported back to Iran where they were arrested.

Hadi was detained on March 10, 2019, for participating in nationwide protests in January 2018. He was tortured during interrogations for at least 40 days after his arrest.

The revolutionary court had brought eight accounts of vaguely defined national security charges against the five Iranian death row protesters including “corruption on earth,” “moharebeh” (enmity against God), and “baghi” (armed rebellion) through the use of firearms.

Mohammad Keshvari was detained for his role in November 2019 protests. He was sentenced to death by the Revolutionary Court on June 28.

Instead of trying to solve the country’s plethora of economic and social problems which has effectively turned Iran’s population into a powder keg, the regime has instead opted to increase suppression. The Iranian regime executes political prisoners and protesters to intimidate would-be protesters and prevent future protests.

During the last round of protests in November 2019, the regime gunned down and killed at least 1,500 protesters in just a few days amid an internet blackout.

According to a new report by the UN’s Special Rapporteur on Iran, “nearly half the victims’ corpses reveal they were shot in the head or neck
and in the chest or heart.”
“The pattern of shooting at vital organs, established by eyewitness accounts, video footage and the documented causes of deaths, demonstrates that security forces were ‘shooting to kill’ or with reckless disregard as to whether their actions caused death,” the report said.