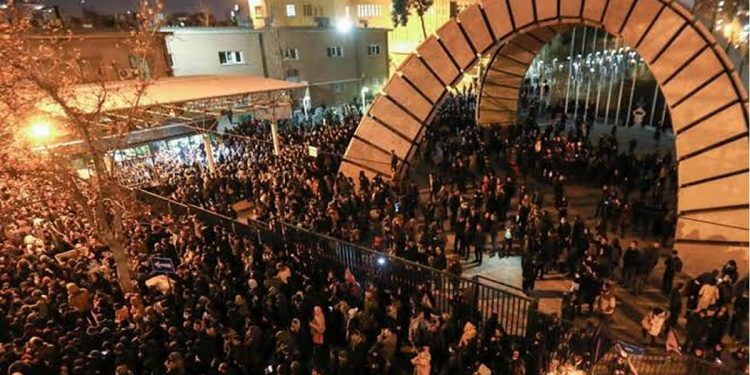 There were 4,482 recorded Iran protests in 2020 with an average of 373 protests a month, according to sources affiliated with the Iranian Resistance.

Protests were held despite of the spread of the COVID-19 virus and the regime’s brutal crackdown.

In March 2020, prisoners in 12 prisons across Iran protested and broke out of prison to demand temporary or permanent release due to the spread of the COVID-19 virus in prisons. This was the first time in the 41-year rule of the regime that so many prisoners broke out in protest, and many succeeded in escaping. Others were brutally shot, killed or injured.

Workers held a total of 1,618 protests in 2020. The salary of workers in Iran, if paid on time, is below the poverty line. Most workers have a family and are the breadwinners of their household. They suffer from months to years of unpaid wages and being exposed to the COVID-19 virus to earn their meager pay.

In 2020, workers protested months of delayed paychecks, not receiving insurance, lack of necessary equipment, poor sanitation and lack of health and safety equipment, lack of job security, widespread layoffs, the privatization of factories and companies, and their other economic grievances.

Railway and mine workers gathered to protest to delayed wages and insecure work conditions.

Workers of the Haft Tappeh Sugarcane Complex in southwestern Iran gathered in protest for 30 consecutive days in July.

Municipality workers gathered in several cities to protest their delayed wages and work benefits. They gathered in 69 cities.

Teachers held 117 protests in 2020. They protested their low wages, which sits below the poverty line. Teachers have applied for second jobs to make ends meet. They also protested their employment conditions, lack of job security, and their other economic grievances. Due to the COVID-19 pandemic, teachers were under more pressure and had to teach online and work more hours, without getting paid for months.

Pensioners gathered 113 times to express their economic grievances in 2020. Most pensioners suffer from various illnesses due to old age which was further aggravated due to the COVID-19 outbreak. Pensioners gathered in an organized effort to protest unpaid pensions and demand higher wages. They say their current pensions put them under the line of poverty.

In 2020, students staged 97 protests in Iran. University student played a major role in January 11 protests against the downing of a Ukrainian airliner, which led to the death of all 176 passengers and crew. A Shiraz University student was sentenced to eight years in prison and 74 lashes for participating in the memorial ceremony of the victims of the Ukrainian airliner.

At the start of the pandemic, students also protested to demand the termination of their in person classes to prevent the spread of COVID-19.

Defrauded creditors gathered 56 times to express their economic woes in 2020. They protested not receiving their savings that were stolen by banks and state-run financial institutions.

Farmers staged 50 protests in 2020. They demanded water for irrigation that has been diverted by state-run companies for industrial use, protested the claiming of their lands by the Endowment Organization, and the regime’s neglect of Iranian farmers. They also protested the low prices of their products, the state not buying their products, not receiving flood concessions, the diversion of Zayandeh Rud River in the central province of Isfahan, and other economic problems.

Livestock farmers held 22 protests in 2020. They protested the low price of milk and high expenses, as well as limitation in their livestock grazing regions, and their other economic grievances include harsh working conditions, and the increased price of fodder.

Iran’s bazaar merchants and shop owners held 26 gatherings in 2020. They gathered to protest the killing of border porters or ‘kolbars’ by the IRGC forces in western Iran, the shutdown of malls, the lack of implementation of the COVID-19 protocols for the protection of unions, the closure of the bazaar due to COVID-19 and lack of financial support from the government, dire livelihood conditions, high parking prices, the lack of customs clearance for their goods, fluctuations in the market and the government’s incompetence in managing prices.

Healthcare workers, who were at the front lines of the fight against the COVID-19 pandemic in Iran, staged many protests in 2020 to express their economic grievance over unpaid wages, increase in work hours without pay, and lack of job security.

Nurses, doctors, and other healthcare workers protested in over 10 cities.

Families of political prisoners and fallen victims of the regime

Death of iconic singer and composer

In October 2020, thousands of Iranians gathered outside Tehran’s Jam Hospital to commemorate the legendary Iranian singer and composer, Mohammad-Reza Shajarian who passed away from kidney cancer. The iconic vocalist master of Persian traditional music was known for publicly speaking out against the regime’s brutal suppression of the 2009 nationwide protests and for his anti-regime rhetoric.

Large crowds gathered and chanted “death to the dictator” echoing Shajarian’s own chant during the 2009 protests.

In late May, Kermanshah locals gathered to protest the killing of a mother of seven, Asieh Panahi, during the demolition of her home.

In Hazrat-e Abolfazl village near Ahvaz, southwestern Iran, villagers protested the demolition of their homes, and were attacked by security forces who fired pellet guns and tear gas at them. There were other protests to demolition of locals’ homes, such as in Bushehr, southern Iran. 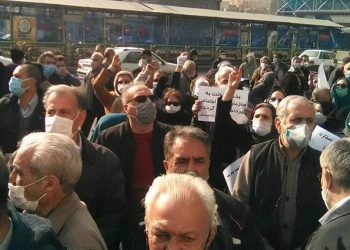