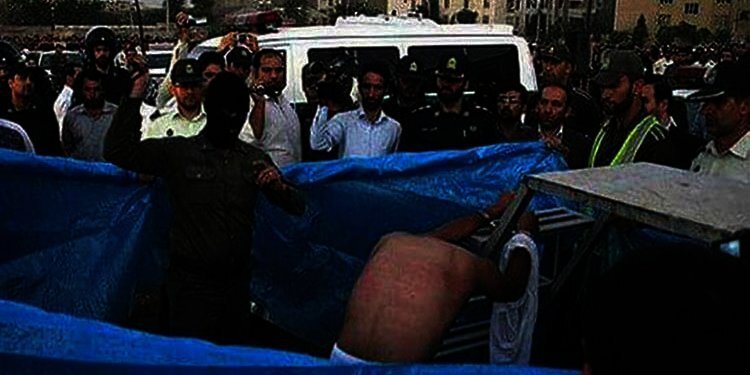 More than 91 protesters were sentenced to flogging in Iran according to information gathered by Iran News Wire in September.

The Iranian regime has increased its use of cruel and inhumane punishment to prevent the spread of increasing protests in Iran.

On September 25, human rights groups said that court in Tehran upheld the seven year prison term and 74 lashes for a Tehran University student activist, detained for taking part in student protests. The Human Rights Activists News Agency said that the 36th Branch of the Tehran Court of Review confirmed the sentence for 21 year old Parisa Rafiei. She has also been sentenced to a two year travel ban and a ban on membership in political groups.

She was charged with “assembly and collusion, spreading propaganda against the state and disrupting public order by the 28th Branch of the Tehran Revolutionary Court presided over by Judge Moghiseh, known for sentencing political dissidents to lengthy prison terms.

Parisa Rafiei, a student of fine arts at Tehran University, was detained on February 25, 2018 by the Islamic Revolutionary Guards Corps (IRGC) intelligence agents and released on March 19 on bail. She was detained for participating in student protests in December 2017.

On September 22, a human rights group said that the public flogging and prison sentence for a teacher and member of the Isfahan Teachers’ Association was upheld by a court of review in Isfahan, cetnral Iran.

Hamidreza Rahmati, who is member of the Isfahan Teachers’ Association, was sentenced to 18 months of prison and 74 public lashes on charges of “disrupting public order by carrying out an abnormal act outside the Education Department building”. He was sentenced to another 18 months of prison and a 20 million toman fine (around $600) for “sending messages on social media that encouraged violence”.

The teacher activist was arrested and then released on bail for carrying out a solitary nine day sit-in outside of the Shahreza Education Department last December protesting the widespread arrest of teachers during their nationwide strike.

On September 18, reports surfaced that the sentence for a Tehran University student activist was upheld by a court of review. According to the sentence, Pedram Pazireh was sentenced to seven years of prison, 74 lashes, a two year travel ban and a ban on membership in groups and parties.

He was sentenced to flogging and prison for participating in the December 2017 protests in Tehran University.

On September 10, a human rights group said that 86 people had been sentenced to flogging in Iran for protesting water diversion to the IRGC linked Isfahan Steel Factory.

The Borujen Criminal Court in the southwestern province of Chaharmahal and Bakhtiari Province tried 103 protesters for “disrupting public order and peace” and “disobeying government agents on duty”.

According to the Human Rights Activists in Iran, 86 of them were sentenced to 30 lashes and 4 months of prison each on July 31.

Though the court was held in July, reports of sentence surfaced in September.

In July 2016, residents of Borujen protested the transfer of their much needed water to the Sefid Dasht Steel Factory owned by the IRGC linked Isfahan Steel Company. The protests led to clashes with security forces, who in turn killed and wounded a number of protesters. Many others were detained.

The region suffers from water scarcity and the water transfer let to severe water shortages in the region. Reports indicate that plans for the transfer are still impending.

On September 7, labor activist and Haft Tappeh Sugarcane factory worker, Ismail Bakhshi was sentenced to flogging and 14 years of prison along with six other activists linked to weeks long Haft Tappeh protests in southern Iran.

Bakhshi was charged with “assembly and collusion to act against national security”, “insulting the leader”, “publishing lies”, “spreading propaganda against the state” and “disrupting public order” for which he was sentenced to 74 lashes.

Ismail Bakhshi, a worker at the Haft Tappeh Sugarcane Factory is currently detained in Evin Prison. He was initially detained for 25 days, during which he was tortured, before being released.

Last November, Haft Tappeh Sugarcane workers held gatherings, streets marches and protests for more than 20 consecutive days. They were protesting not receiving their paychecks and the privatization of the factory.

On September 1, a young man identified as Yusef Jalil was sentenced to six months of prison and flogging for publishing content in his Telegram group.

The 6th branch of the Revolutionary Court in the southwestern city of Yasuj found Jalil guilty of “insulting the founder of the Islamic Republic” and “spreading propaganda against the state by disrupting public opinion”.

The court has suspended the sentence for three years due to Yusef’s young age and because he did not have a criminal record. The report did not mention his age.

Flogging is a cruel and degrading punishment and is tantamount to torture.

4 Iran self-immolations, 1 suicide in one day over economic pressure

More than 280 Sept. protests in Iran despite prison, lashes, threats

More than 280 Sept. protests in Iran despite prison, lashes, threats

Hundreds take to streets in Lordegan over HIV infection- Video