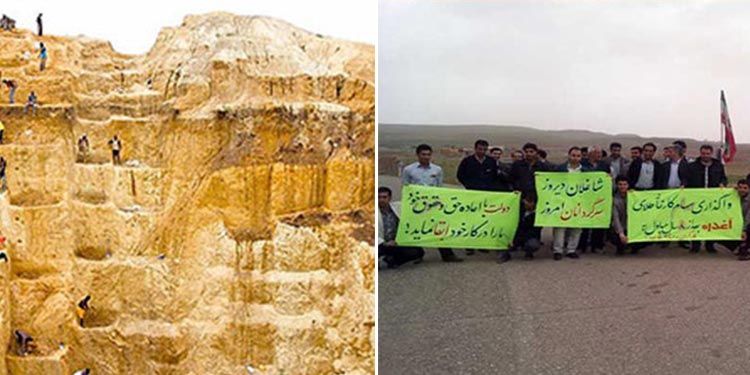 Seven people in northwestern Iran who were prosecuted in relation to a peaceful gold mine protest will be jailed because they cannot afford the fine. According to the state-run ILNA News Agency, the sentence for three of the men has been carried out in Agh Dareh, West Azerbaijan province. They were detained in relation to protests by locals demanding employment at the Agh Dareh Gold Mine in 2017.

The men have been sentenced to a 5 million toman fine (around $270) or 21 months of prison.

On June 10, one of the mine workers identified as Daryoush Nikzad was arrested to serve the 21-month prison sentence because he was unable to pay the fine.

According to the report, Agh Dareh is an impoverished region in Takab and its residents lack basic facilities. All the convicted men suffer from financial difficulties.

“Only one of the convicted men worked in the mine and when he was sentenced, he left the mine. Another one of them is a shepherd and the rest are unemployed,” a miner said.

Now locals are trying to raise money to pay the fines and prevent the men from going to prison.

ILNA said that the head of the Agh Dareh Mining Company had taken back his complaint against the locals.

“The company dropped the charges seven or eight months ago. Our lawyer went to the Justice department and confirmed it. The public prosecutor is pressing charges for the public aspect of the crime,” the head of the mining company said.

The “public aspect of the crime” means that Iranians are not allowed to protest and if they do, they must be punished to set an example so others do not follow suit.

According to the IndustriALL Global trade Union, 17 Agh Dareh gold miner were publicly flogged in May 2016, for protesting the layoff of 350 of their colleagues.

The Iranian regime does not recognize independent labor unions. Workers are regularly sentenced to prison or flogged for practicing their right to protest. All workers in Iran live under the line of poverty and can barely make ends meet. Despite this, many workers are not even paid their meager wages.

Last week, two workers at an oil company in southwestern Iran committed suicide at two different oil wells in protest to not receiving their wages. One of the workers died while the other one was saved in time by his friends and co-workers.

The Italian General Confederation of Labour (CGIL) issued a statement in June to express solidarity with Iranian workers. CGIL shed light on the plight of Iranian workers and asked the International Labor Organization and the United Nations High Commissioner for Human Rights to “defend the fundamental rights of workers”.

CGIL, the second-largest trade union in Europe, has around 5.5 million members.