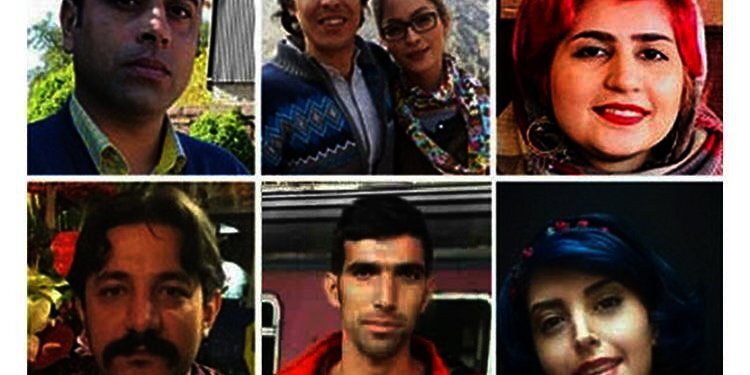 According to the sentence, Ismail Bakhshi was sentenced to 14 years of prison and 74 lashes, while Mohammad Khanifar was sentenced to six years of prison. Bakhshi was charged with “assembly and collusion to act against national security”, “insulting the leader”, “publishing lies”, “spreading propaganda against the state” and “disrupting public order” for which he was sentenced to lashes. Khanifar was charged with “assembly and collusion and spreading propaganda against the state”.

They were charged with “assembly and collusion to act against national security”, “membership in the Gam” (a publication they wrote for), “spreading propaganda against the state”, and “publishing lies”.

Their trials were held last month in the 28th branch of the Tehran Revolutionary Court.

Ismail Bakhshi, a worker at the Haft Tappeh Sugarcane Factory is currently detained in Evin Prison. He was initially detained for 25 days before being released.

He also detailed the use psychological torture against himself and a female civil rights activist and photographer detained along with the workers for taking pictures of their strike, and called the mental torture worse than the physical torture.

Before this, On August 13, seven workers of the Haft Tappeh Sugarcane Factory in the southwestern city of Shush were sentenced to eight months of suspended prison and 30 lashes each.

According to the Haft Tappeh Sugarcane Syndicate, the workers were tried and sentenced by the 102ndBranch of the Shush Criminal Court.

Last November, Haft Tappeh Sugarcane workers held gatherings, streets marches and protests for more than 20 consecutive days. They were protesting not receiving their paychecks and the privatization of the factory.

The Iranians regime uses torture, lashes and incarceration as the only way to stifle the voice of dissent. Despite this, Iranians held more than 177 protests in August to express their economic and political grievances.